The Presbyterian Church of Brockport was organized March 19, 1828, as a Congregational church, with six members, and it remained Congregational in its form of government for the first six years of its existence. But in 1834 a change was made to the Presbyterian form of government, and six ruling elders were chosen, namely: Moses Nash, Simeon Benedict, Jacob Sutphin, Silas Judson, Ralph W. Goold and Calvin McQuestion. Some seven years later, the old church was dissolved, and a reorganization effected in the Presbyterian form, entirely new sets of officers being elected. The ruling elders chosen at this time Jacob Sutphin, Hollister Lathrop, Ralph W. Goold, John Efner, Ensign Bushnell, Simeon Benedict and Joseph Ganson. The deacons elected were Daniel Belden and Charles Wicks. From this date the church has remained a thoroughly sound and firm Presbyterian organization.

Not long after its organization in the Congregational form, steps were taken to secure a house of worship. A suitable lot for such an edifice was donated to the congregation by Mr. James Seymour and thereupon, with commendable expedition, was built a substantial and convenient church at an expense of some $5000. After rendering good service for about a quarter of a century, this was taken down in order to be replaced by a better. This new church was erected in 1852 at a cost of $6526 and this substantially is the house now occupied by the congregation.

​During the last ten or twelve years the church building has undergone considerable changes in the way of exterior and interior improvements. These have included a new and excellent pipe organ, for which an extension was built at the north end of the church, new pews, a complete set of new windows, a remodeling of the entrance to the church, changes in the heating apparatus, and a renovation of the rooms on the lower floor of the church.

In 1904 the manse which had served the church for many years, on the opposite side of the street, was sold, and the present manse located directly west of the church was purchased.

​In recent years the improvements of the church has been internal rather than external. Mr. Moore introduced the Vesper services, taking the place of the former evening services. They are devoted largely to Sacred Music with short practical talks. The twilight hour of the Sabbath attracts many worshipers and thus the Vespers service has proven a blessing to the whole community. This success is largely due to Mr. Moore who after a very successful pastorate of four years resigned for a year’s study abroad and is now Instructor in Auburn Seminary.

The present Pastorate commenced with an impressive Installation Service at which noted Divines participated. The inspiring sermon of Professor Hoyt of Auburn will long be felt and remembered.

During the last year these has been a continuation of the campaign for spiritual education and development. For this end our Sunday School is equipped with a graded system of lessons which are taught by able teachers. The whole school is managed by capable officers. Last Easter there was a Lenten series of services consisting of a series of Lenten sermons Sunday morning on the subject, “Ancient Voices for Today;” also Passion Week services, and a mission study .

The Presbyterian choir has performed a very useful ministry in its rendition of sacred Music. The choir has been enlarged and under the efficient leadership of Mr. Whitcomb has rendered the Masterpieces of Sacred Music. The Easter Cantata of last Spring and the recent Harvest Cantata will be pleasantly remembered for a long time and by them our community life was spiritually uplifted. The choir is at present rehearsing for another Cantata which will be the Christmas Cantata to be given December 21st , at the Vesper hour.

The same ideal of spiritual education and development will be pursued this next year and along with this there will be an effort to deepen our social life. With this in view an elaborate program of social good times is being made. Our church parlors will be made the means of spiritually and socially deepening and broadening our friendships.

The Presbyterian Church of Brockport built upon the “one foundation of Jesus Christ, our Lord” with a record of nearly a hundred years of substantial growth and faith stands as ever ready and eager to minister the needs of all. 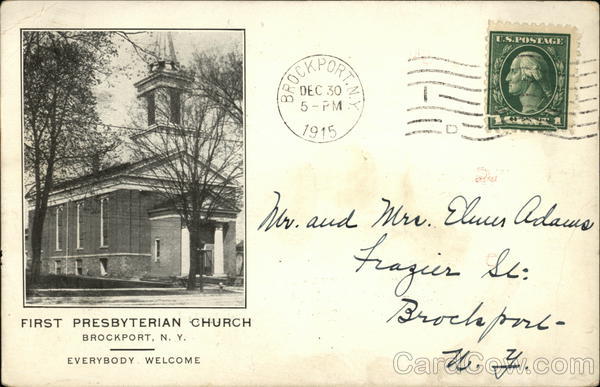